Watch out for deer! 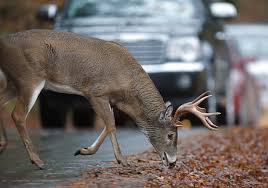 Fall season mean cooler weather, shorter days, and football season gets serious.  But the fall is also the time of seasonal migration of animals, particularly deer, throughout large parts of the country. Throw in the fact that’s it’s also deer hunting season and it’s no wonder that one-third (34%) of all animal collision comprehensive claims are filed during the fall.

The average cost per insurance claim for collision damage is $2,800, with costs varying depending on the type of vehicle and severity of damage. When you factor in auto claims involving bodily injury, the average rises to $10,000.

Here are some defensive driving tips to help you avoid hitting a deer, courtesy of the Insurance Information Institute:

If you do hit a deer or other animal, contact your Jowers-Sklar Insurance agent to file a claim or to receive advice and assistance.  If it’s after hours, you can reach most of our companies directly via our claims page, or you get in touch through our client portal.   We’re here to help whenever you need it.

We’re an independent insurance agency offering expert advice and a comprehensive suite of insurance solutions to protect your business and your life from the unexpected.

We don’t just sell insurance. We work closely with clients to help them make important and informed decisions every day when it comes to protection and their future.

Jowers-Sklar Insurance is located in Rome, GA, serving all of Floyd County and surrounding areas. We also serve clients in 16 states and counting. How can we serve you?

We’re here when you need us most. Call, email or stop by.